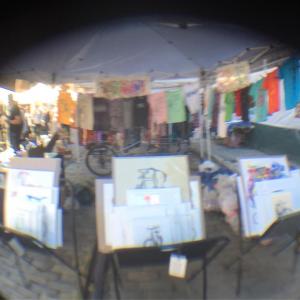 Yesterday at the Brooklyn FleaI had a good chat with an animator/illustrator guy who was asking about my trajectory,how I came to be making a living from my work. I told him how I was working freelance decorative painting, and had been working on the bicycle pictures for about 3 years,when I felt this drive, that I had to focus and make plan a work or figure out a different dream. So I had postcards made, advertising my work and got exhibitor books from a design trade show and Interbikeand, on the typewriter, made labels and sent postcards to everyone in those books I thought might be interested.   There was some response so I sent out color Xeroxes with a SASE. A few pieces were sold, a magazine write up and a show in Colorado, which was awesome. Two people from different cycling advocacy groups told me they had tried to stir interest in my work but had the same reaction from their boards.They both said I needed a website or no one could work with me. So I bought a computer, 1999, and with the help of an amazing friend launched Bicyclepaintings.comand learned enough html to grow it.I had more postcards made and put stacks of them in bike shops around NYC and got  some reaction.I found local cafes and shops to show my work.  I sold a couple pieces online!The big break  happened when a cyclist who worked at CBS Sunday Morning picked up one of my cards,when the show did a piece on art on the web, he suggested me as an example of an individual artist who was online. It was a great experience,the CBS Sunday Morning crew  was so kind and made a lovely piece. The response was overwhelming and when the show first aired in 2000 I quit my day job and with a couple setbacks have been making a living off my art ever since. It’s been an incredible experience and there’s been a lot to making it happen and keeping it going. I work harder at this than I have at anything before ever.  I am proud   my art sustains me. There is a bit of a self-portrait in thatthe bicycle is a self-propelled vehicle, and so am I.