Dave put this bike together for me
after I got mugged for my Duracycle
on the Willy B, in '99.
I didn''t have it long, just a few weeks
until I bought a Raleigh Pro on Ebay
and replaced it.

I only took this photo, now in 2013
I had given the painting to Jared
who gave it to Lex, when he moved,
who just now gave it to Amanda
so I took a picture before she gives it to Hilary
in trade for the picture of Amanda's bike that she's been holding. 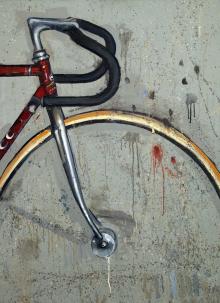